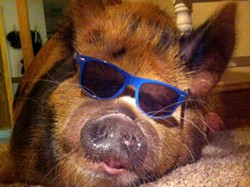 In an October article, New Yorker writer Patricia Marx describes how she boarded an airplane with a pig, testing the limits of a federal law that allows people to bring animals almost anywhere with no scrutiny simply by claiming they're for emotional support. (She also took a llama into a museum and a turkey on a bus.)

Last night, a Chesterfield County family and its embattled pet pig, Tucker, suggested that it would take a similar tact in a fight to keep the animal at its Brandermill home. The Board of Supervisors is voting tonight on a conditional use permit.

Regardless of the board’s decision, the family’s claim that Tucker provides emotional support and cures anxiety could be enough to kick the issue into federal court. The right to keep emotional-support animals, pigs included, in housing where the pets are otherwise prohibited, is laid out in the Fair Housing Act. [WRIC, WWBT]

The city’s sparkling new jail is already over capacity. [Style]

The contractor building a city-financed brewery for Stone Brewing may have gotten a head start: Two weeks before it was awarded the city contract, it applied for permits to begin a small portion of the site work. [Times-Dispatach]

The state self-insured its rocket launch facility on Wallops Island, and now the governor is seeking help covering $20 million in damages caused by an aborted launch. [Times-Dispatch]

How will the city know when the mayor’s ballpark proposal is dead for good? [Style]