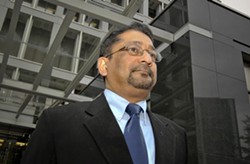 A former employee of the city auditor’s office apparently didn’t think much of his co-workers’ abilities to ferret out government waste and fraud.

The employee attempted to use forged doctors’ notes to use sick time before a planned resignation, according to -- what else? -- an audit recently completed by the office.

The forgeries weren’t that good, according to the report, which doesn’t name the employee. The notes were altered photocopies of one legitimate note.

City Auditor Umesh Dalal says he forwarded the case to the commonwealth’s attorney.