While plenty of tasty winter warmers remain out there, the abundance of fresh India pale ales in this city and unseasonable weather makes us long for porch drinks, river rock hangs and longer days. After exploring what’s to come, I’ve rounded up offerings from both ends of the spectrum to make sure to keep everyone happy and satiated.

They said it would never happen. The curious purveyors of strange have crafted a good, old-fashioned lager. To be fair, it’s anything but ordinary. Hopped with Glacier, Galena and Centennial, it’s low on bitterness with a robust, malty backbone and light to medium body. This crafty creature is an easy drinker sure to please lager heads as well as those looking for something that can take them through the evening without a headbanger in the morning.

Fans of this 2015 release will rejoice knowing it’s now back annually. Lots of hops come together to tantalize your buds with citrus zings and a wallop of tropical aromas. This imperial IPA pours hazy amber with a pillowy head. It has a hearty helping of malted barley from Copper Fox Distillery that offers up a nice balance. Despite the alcohol, it’s not a booze bomb. 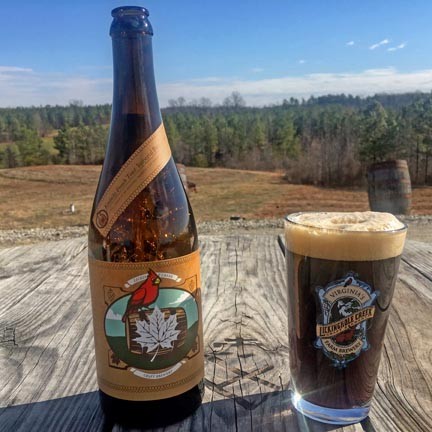 Another stellar offering from the farm. This barrel-aged imperial brown ale boasts a prominent bourbon flavor that hits you right up front. Swirl it around in your mouth to reveal subtle maple and vanilla notes followed by a smidge of cinnamon at the finish. Its creamy mouth feel and medium body make this one an easy drinker — even before noon.

A unique brew that’s the cool kid at the party based on looks alone, this American IPA pours pinkish amber with an off-white head. Brewed with tangerines and hibiscus, it’s dry-hopped with Citra and Amarillo hops, making it tangy, dank and bursting with fruity aroma. Bonus points to Champion for crafting a label akin to an album cover straight out of the ’80s that would make Duran Duran proud.

Piece of the Action
7.0 percent alcohol
The Answer Brewpub

Fans of Mosaic hops will absolutely want in on this citrusy little number. Pours hazy golden and immediately delivers a phenomenal floral bouquet that includes hints of pineapple, papaya and mango. The finish is nice and dry. This beer will make you want to punch winter square between the eyes.