When the weather heats up, cool down with these frosty, frothy friends.

Nothing pairs better with warmer temperatures and longer days than a cold beer. The River City is busting at the seams with suds and there are plenty of thirsty folks to consume all of the offerings. With the shelves and taps filling up with a load of crisp seasonal ales and hop bombs, it’s easy to be overwhelmed. We’re here to help. Whether you’re a fan of an easy drinker down by the river or seeking out the next hoppy assault on your palate, Virginia breweries new and old are serving up something sure to please and occasionally surprise. 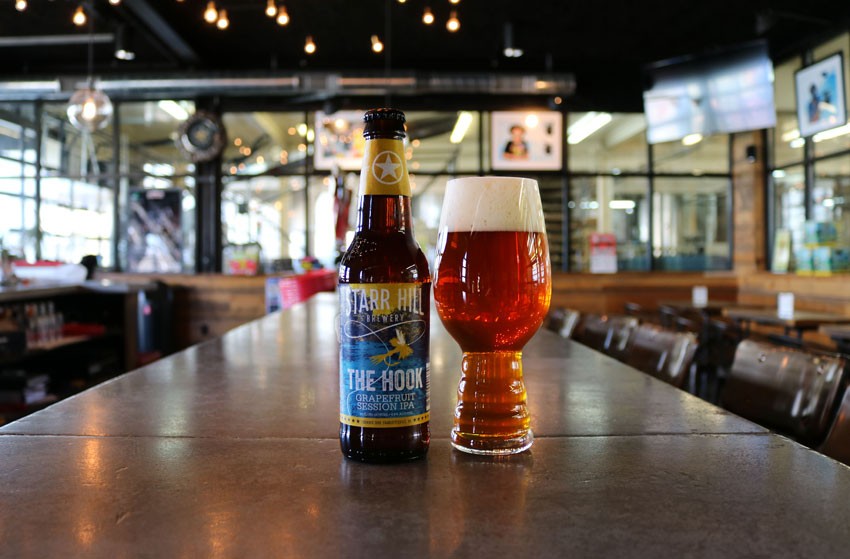 For a session beer, there’s a lot going on with the Hook. Deep gold and tasty, this American IPA balances a fresh bouquet of Apollo, Citra and Mosaic hops with the bite of grapefruit, courtesy of real zest added to the brew. The up-front tanginess mellows out as this medium-bodied brew swirls on the palate and finishes semi-dry and surprisingly earthy. It has nice lacing in a glass, but doesn’t suffer if consumed straight from the bottle down by the water. As it’s aptly named, you’ll be back for more than one of these.

Holy dankity deliciousness! Since its opening, this beer has been adored by those who stand in lines wrapped around the Scott’s Addition brewery to get their hands on it. The cans sell out as soon as they’re available, and this Northeastern-style concoction has already been called “liquid perfection” by some fans. So what’s the deal? It’s a double-IPA-lovers’ dream that pours hazy gold with a creamy head and delivers a citrus smack followed by a piney punch with unparalleled freshness. Seriously, it’s like eating a salad. For all of its hop forwardness, it’s easy on the palate with medium body and carbonation. The Veil gets major bonus points for the “Wayne’s World” reference. Party on, y’all.

Some of the best things are the simple ones done just right. It’s fitting that Hardywood’s latest release in the Brewer and Artist series pairs Justin Anderson’s bottle-conditioned saison with the label work of Lakeside Tattoo’s traditional design master, Rempe. Both are unfussy and straightforward in their craft. Anderson’s creation pours straw gold with a beautiful pillowy head. It’s crisp and semi-dry with a lean mouth feel, making it ideal for the dog days of summer porch sitting. Spicy and earthy tones are prominent, though the discerning drinker likely will detect a smidge of tartness characteristic of this style. The finish is pure, soft maltiness and absolutely delightful.

New kid on the local block Castleburg is coming out of the gate strong with this flagship beer. Some call it Cascadian dark ale, others call it black IPA, but everyone likely will agree that it’s distinctive and a welcome sight this time of year, when light-bodied and über-hoppy dominates. A Warrior, Cascade, Centennial, Chinook hops combo yields an organic and piney profile with floral notes. There’s a hint of citrus, but the take-away here is the earthy goodness that pours opaque and lands silky on the palate. According to owner and brewer Karl Homburg, the combination of dark malts from England and Germany give this beer its dark roasted chocolate and coffee notes that balance it all out.