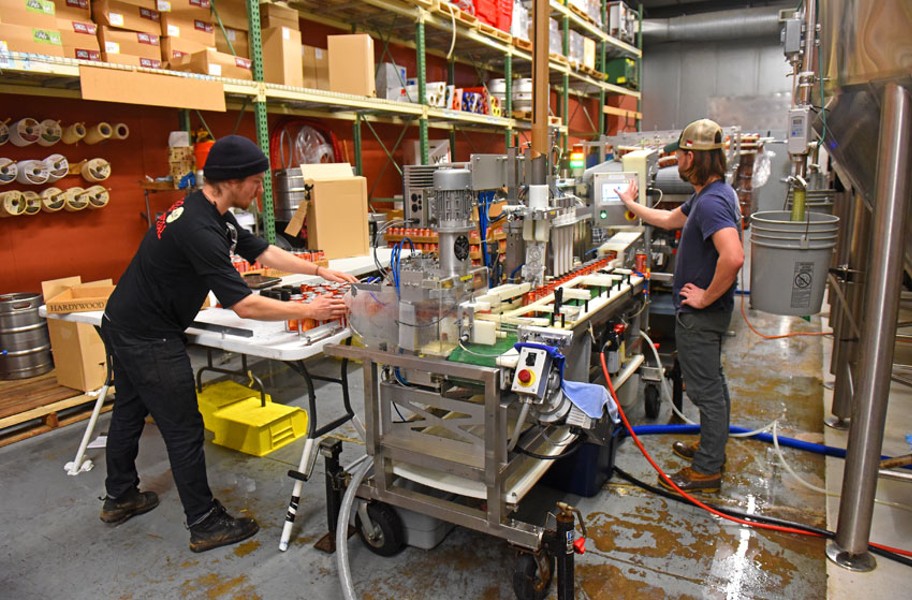 Richmond is a canned beer kind of town.

For proof, look no further than Outside Magazine’s designation of the city as best river town in America. As any outdoor enthusiast — kayaker, fisherman, boater, cyclist or hiker — knows, bottled beer is ill-suited to life on or along the river and trail.

In recent years, canned beer has surged in popularity. It’s cheaper to produce, and because cans weigh less, the brewery’s carbon footprint is smaller during shipping. Light is the enemy of the organic compounds in beer, so beer in an opaque container tastes better longer.

But for a startup brewery, adding a canning line is expensive. Initial entry can cost a brewery $250,000 or more before the first cans are filled. Enter Old Dominion Mobile Canning.

With mobile canning, there’s no capital outlay for equipment, no dedicated floor space, no operational training, no maintenance and no large truckloads of cans.

Old Dominion rolls up and hooks directly to the finishing tanks where beer is fed into its canning line. Cans are then loaded into the machinery, sanitized, purged with carbon dioxide, filled, seamed, rinsed and packaged, at a rate of 30 to 40 per minute.

“We’re usually on site anywhere from six to 12 hours,” owner Mike Horn says. “We can process up to eight barrels of craft beer per hour under the right conditions.”

Old Dominion can accommodate small production volumes, too, offering nonpackaging and hand-packaging breweries access to a broader market and increased revenue. The breweries design the art for printed, shrink-sleeved or self-adhesive cans, depending on their preference and budget.

Square footage was a limiting factor for Hardywood in its current facility. But Old Dominion enabled the brewery to send canned beer out into the market without having to dedicate space to its own canning line.

“Their equipment comes in and out of our brew house like a really awesome phantom that leaves pallets of freshly canned beer in its trail,” says Hardywood’s marketing manager, Matt Shofner.

Although some beer snobs still look down their noses at cans, Horn is quick to challenge them with a host of rebuttals. For one, aluminum cans are better for the environment than glass bottles because they’re made out of more than 90 percent recycled content.

A water-based polymer seals the can and ensures no contact between beer and aluminum, preventing any metallic contamination. And a can is impenetrable to light and oxygen, preserving quality.

And back to that river lifestyle — cans are extremely portable, making them perfect for outdoor activities, especially in places where glass bottles are forbidden such as swimming pools and outdoor events.

“Consumers like the functionality and convenience of canned beer, so we see our canned products getting great placements in grocery stores and outdoor venues,” Shofner says. “Our fans are big on travel and outdoor activities, and they like being able to take our beer with them wherever they go.”

Two varieties of Hardywood beer even benefit the great outdoors: The Great Return is brewed in support of the James River Association, while Capital Trail Pale Ale supports the Virginia Capital Trail Foundation.

Perhaps just as significant given Richmond’s notoriously muggy summers, cans cool down faster than any other beverage container, resulting in better taste.

Just ask Horn, who says: “Think of a can as a minikeg for your craft beer.”