These cellars are the last vestige of a 19th-century brewery. 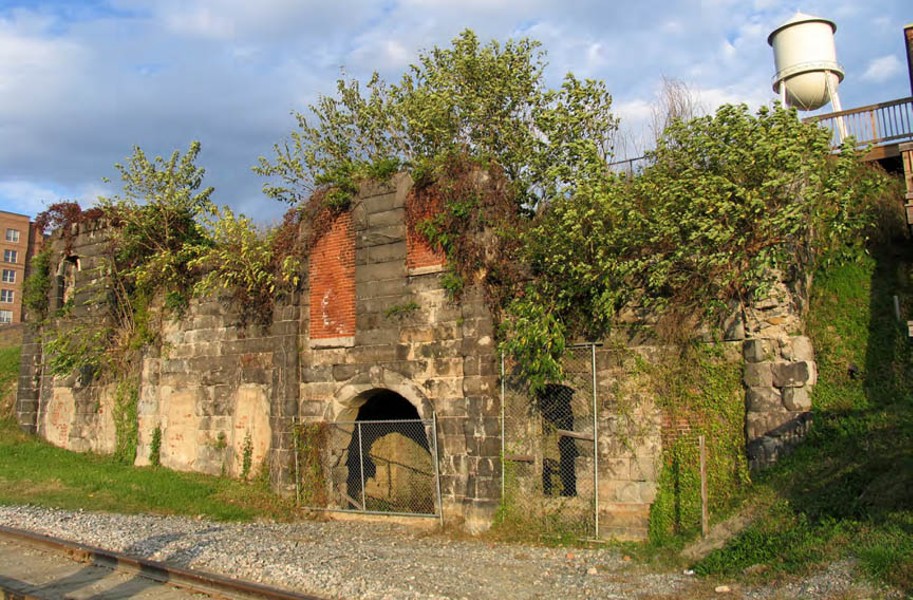 National Registry of Historic Places A fire destroyed the building in 1891, but the James River Steam Brewery's beer caves are still standing.

Richmond beer lovers may have heard of them, but few locals know about the now-abandoned beer caves at Rocketts Landing. And if you don’t know what you’re looking for, you may miss them entirely.

They look like so many other architectural ruins scattered about a city with a long history. But the arching entrances are some of the few signposts that remain of Richmond’s pre-Prohibition brewing industry.

The caves, blocked by chain-link fencing, officially are listed at 4920 Old Main St. and overlook the boat slip at Rocketts Landing. They were originally part of the James River Steam Brewery, built in 1868 by D.G. Yuengling Jr., son of the founder of D.G. Yuengling and Son -- a brewery still very much in business in Pottsville, Pennsylvania. Richmond’s 19th-century brewery operated under steam power -- hence, its name.

The building was a towering 80 feet high and the caves constructed underneath were able to hold 6,000 barrels, according to Lee Graves in “Richmond Beer: a History of Brewing in the River City.” The tunnels were used for both fermentation and storage -- placement near the banks of the river was intentional to allow for easy transport to the railroad or water.

“Unfortunately, events did not favor long-term success,” Graves writes. Competition increased as refrigeration became more widespread. And the financial crisis of 1873 knocked the beer business back even more, leaving James River Steam Brewery as the only company producing beer in the area. Yuengling hung on until 1879 when he shut down.

“I went to Richmond, Virginia, and put $500,000 in a brewery, and came back without a dollar,” Graves quotes him as saying to a New York journalist.

Richmond Cedar Works took over the building and used the caves for storage. That structure succumbed to fire in 1891, but the sturdy stone cellars survived.

As the Richmond brewery scene heated up, there was talk of redeveloping the site as a new brewery, but nothing came of the deal.

The caves have become something of a tourist spot, although there hasn’t been much to see other than high walls and standing water. Just beyond the largest archway, about 10-15 feet of the roof near the entranceway has collapsed, stopping at a large, continuous root that connects four trees. The root appears to have insinuated itself within the structure and perhaps caused it to weaken.

On a sunny day, light streams through the cave in and you can get a sense of the how much the cellars once held. It’s still only a partial view -- three additional vaulted tunnels with storage bays branch deep into a hill.

The caves were placed on the National Park Service’s National Register of Historic Places in 2013. “As a property that has remained vacant since 1891, having only been used for storage after the brewery’s closing,” the application says, “the cellars remain largely untouched and stand as a unique remnant of mid-19th-century brewing methods near Richmond’s edge on the bank of the James River.”