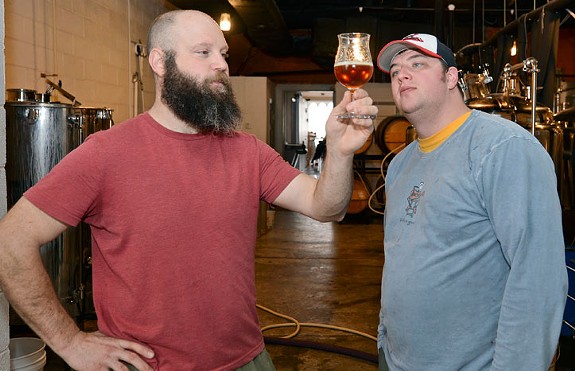 Michael Brandt has a vintner’s eye and research scientist’s sense of precision. He’s been both.

Garden Grove Brewery’s co-owner and brewer trained at Naked Mountain Winery & Vineyards, and then at Linden Vineyards under legendary winemaker Jim Law. He has a graduate degree in environmental studies and worked as an agricultural research scientist at Virginia State University.

That background gives Brandt a very different perspective on brewing beer — and you’ll hear some fairly radical things come out of his mouth.

“I don’t see why there has to be a separation of anything,” he says. “Why do we have [beer] styles? Why do I have to make these things that were predetermined in the past?”

Case in point: Brandt hands me a foaming, pale yellow glass of what might almost be wine, but certainly isn’t beer. Honey Sparkler is made from sorghum, honey and hops, and although it has a sweetness that echoes mead, there’s an acidity and bitterness from the hops, plus a thick effervescence and a good kick from its 8-percent alcohol that resembles beer. It’s also gluten-free — Garden Grove plans to always have a gluten-free option available — and it’s unquestionably its own beverage.

The next gluten-free batch will be made with juice from Petit Manseng and Vidal Blanc grapes. “We’re going to make a Belgian quadruple with red wine grapes like merlot,” Brandt says. “I have lots of wineries that are itching to give me grapes and have us do collaborations.”

How do these kinds of experiments differ from winemaking? For one, the brewery doesn’t press grapes or do extensive barrel aging. Brandt starts with juice and processes it like beer. For him, creating a perfect balance among flavors is the biggest lesson he learned from winemaking.

“It’s very tricky to add things so that everything gets to talk,” he says.

Richmond’s brewery scene is IPA-heavy, and this kind of experimentation — plus a prime Carytown location — sets Garden Grove apart.

Brandt’s partner, Ryan Mitchell, came to the business the way a lot of brewery owners do — he had an intense passion for craft beer. He also was looking for entrepreneurial opportunities. When he lost his job at Dominion Virginia Power during a round of layoffs, he was ready to write a business plan.

Mitchell posted an ad on Probrewer.com, a beer industry website, looking for potential brewers. He received around 100 submissions. During the interview phase, Brandt explained to Mitchell that if he did anything less than a 10- to 20-barrel system, he would make no money. He also told Mitchell that the only way to get to know him was to taste his beer.

Mitchell tasted Brandt’s home-brewed saison ale. “It blew my mind,” he says. “It was instant love.”

While the two worked to build the brewery — and they say they did everything themselves except for the bar and the tanks — Brandt offered to buy into the business and Mitchell leaped at the chance. “With an owner, there’s blood in the game,” he says.

Paintings dot the low-key green and taupe walls, with barrel tables and comfortable couches augmenting the bar. Cheese, charcuterie, salmon and other light snacks are on offer, along with ginger ale brewed on-site for children, designated drivers and anyone else that doesn’t drink. They plan to make root beer and an orange-vanilla Dreamsicle soda down the road.

“Most breweries are in a sense family-friendly,” Mitchell says, “but they don’t offer an array to everyone.”

Garden Grove has six varieties of beer on tap including the saison that captured Mitchell’s attention, the Farmhouse, and a Belgian triple, the Knight, an imperial stout, Solera, and its own IPA, Southern Hemi, containing hops from Australia and New Zealand. Brandt has a fondness for British beer and you’ll see its influence in Garden Grove’s Carytown Brown Ale and Ronnie’s Red Ale.

Eighteen months passed from the day Mitchell first created his business plan to the day he poured the brewery’s first draft for a customer. “It’s unbelievable,” Mitchell says, “and it’s been wicked scary.”

“I was too tired to be scared,” Brandt says.